Founded by her grandfather, her family ran De Paolis I.N.C.I.R., the only Studios structure privately owned in the country. In operation from 1941-1991, De Paolis I.N.C.I.R. housed the productions of over 2000 films including the works of Fellini, Bertolucci, Visconti, Rossellini, Antonioni, Pasolini, and Godard. 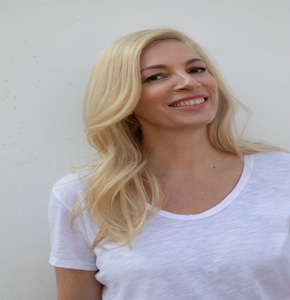 After spending the majority of her adult life in New York, De Paolis has moved to London in the winter of 2019 where she developed her second feature film THE LOST GIRLS which she also wrote, directed and starred in alongside Vanessa Redgrave, Joely Richardson, Iain Glen, Parker Sawyers, Julian Ovenden, Emily Carey, Ella Rae Smith and Louis Partridge. The movie is backed by Ingenious and Myriad Pictures in association with Lipsync and was released theatrically in the UK by Altitude Films and in the US by Vertical Entertainment in June 2022. The movie has also been acquired for distribution in several other countries.

Her first feature film Emoticon ; ) which she wrote, directed, produced and starred in, opposite Michael Cristofer, Carol Kane, Sonia Braga, Diane Guerrero and Daphne Rubin Vega was theatrically released by Indiecan Pictures and is currently available in DVD and on all the major digital platforms. Emoticon ; ) won the Best Ensemble Award at GenArt FF and the Critics Award at Siena FF. Her short film Awestruck was picked up by Shorts International for both broadcast and digital distribution in the United States, Europe and South Asia.

For her accomplishments in the theatre De Paolis was granted a green card as an artist of extraordinary ability. She now holds both Italian and American citizenship and currently resides in London.